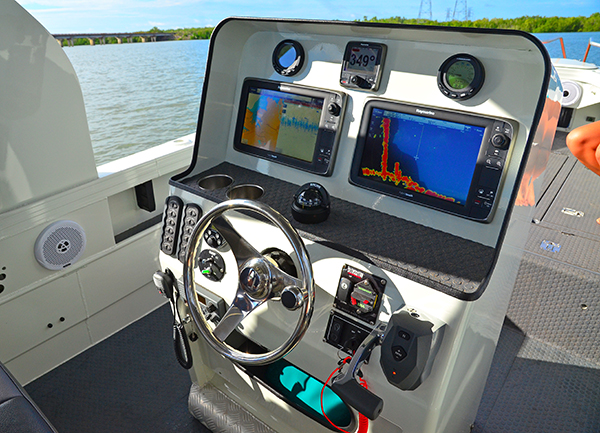 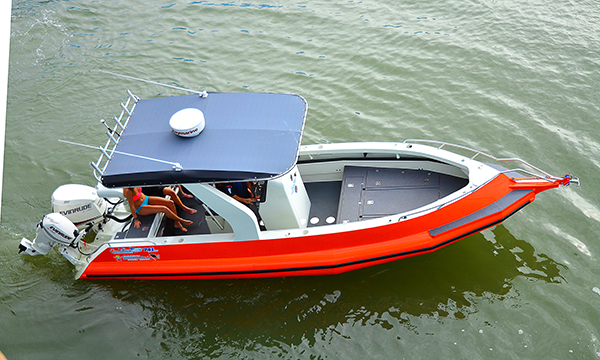 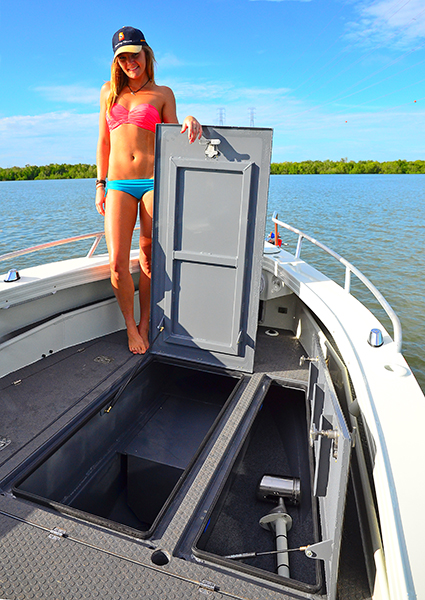 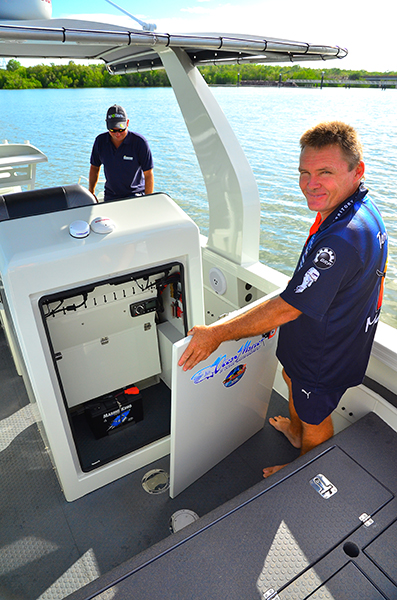 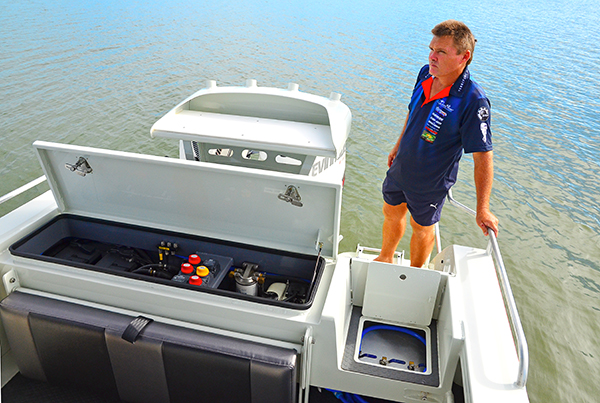 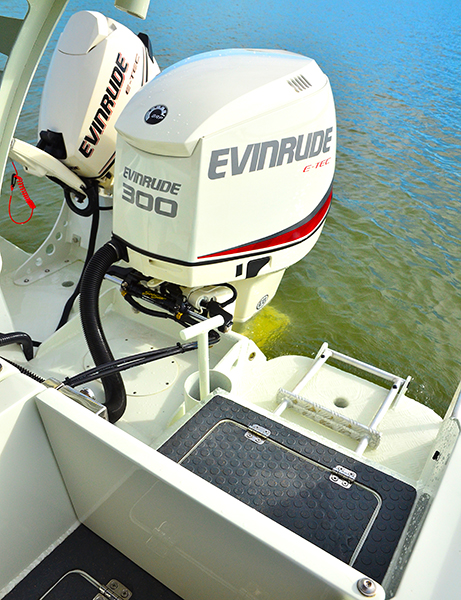 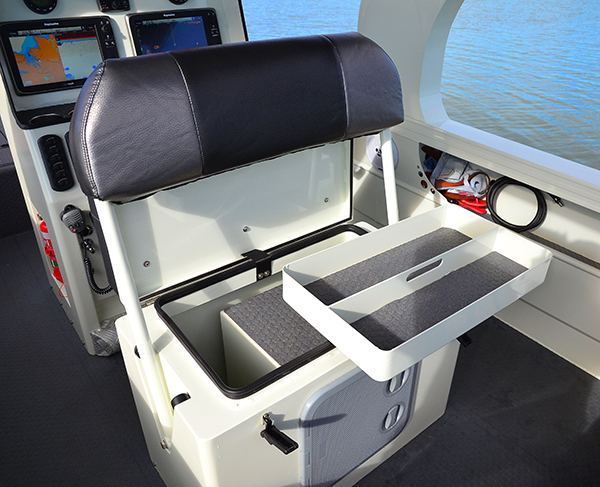 Powered by an E-TEC 300, the Ocean Master 741 Vortex is an immaculately-finished offshore (and inshore) trailer boat that offers practical fishability, together with eyebrow-raising, rough-water comfort at speeds you wouldn’t think possible unless you’d been there.

The Ocean Master 741 Vortex we tested was built for Townsville’s Tony ……….. who has his sights firmly set heading out to the Great Barrier Reef.

All Ocean Master boats are designed in New Zealand by Scott Robson, built in Wakerley Queensland, and then sent to Darwin to be fitted out by Territory Marine.

If there is one boat hull and range that I know well, it’s Ocean Master. There are six sizes in the range, and our Arnhemland Barramundi Nature Lodge operates three of those across a fleet of seven boats.

The 741 Vortex is the flagship of the Ocean Master range, and is available both as a customised rear-or-centre console, or as a cuddy cabin. Our test boat was the standard centre console, powered by an Evinrude E-TEC 300.

As I explained, the Lodge operates several Ocean Masters: two 451 Riptides; three 511  Storms; and a 651 Twister. The Twister is the next size down from the Vortex and the only hull difference is in the length. In other words, the larger Vortex has the same beam, same depth and same thickness in the various aluminium hull components; it’s just 900mm longer.

When I reviewed the Ocean Master 651 Twister about five years ago, I wrote:

The Goomadeer River is tucked away right at the apex of Junction bay in Arnhemland. During the Top End dry season, often as not, a stiff easterly wind will push sharp, steep, metre-plus waters straight into the bay. In your typical trailer boat around 6 metres in length, when the wind blows against the tide, and the waves are particularly close together, getting out of the bay from the river mouth, a distance of about 12km, can take more than an hour. It’s a fight all the way.

The first time I took the Ocean Master 651 Twister out of the Goomadeer and into the teeth of a 25 knot easterly blowing white caps across Junction bay, that same 12km took only 20 minutes to cross, and it was comfortable all the way. I had three people with me, and one of them, Shimano’s Terry Dunphy, was literally moved to say: “There’s no doubt this is the best trailer boat into a sea that I’ve ever been in; it doesn’t seem to bang at all.”

Well guess what…the Ocean Master 741 Vortex performs even better out on the rough stuff for the simple reason it is nearly a metre longer than the Twister. That just makes sense, doesn’t it?

To be up front, I haven’t been out in the Vortex in sea conditions that would really test its capabilities, but I asked Steve what it’s like. His answer: “Man, it’s sick. We were out in some really bumpy water recently, and I ripped her back to Darwin Harbour at 70kph. You know how soft-riding the 651 is; well this one’s even softer in the rough stuff. I just give it to her and does she perform!”

Naturally, you’d expect Steve to be biased, but I have every reason to believe him as I know firsthand what a sea-eater the 651 Twister is.

Construction & Finish Territory Marine claims: “Ocean Master packages are custom built to suit the customer’s needs. Designed in New Zealand and fitted out at our Yarrawonga location, they are no doubt second to none when it comes to their appointment and meticulous finish. Their ability to handle all-weather conditions has made the Ocean Master name the most sought-after vessels amongst the Northern Australian fishing fraternity.

Ocean Master boats are built to a standard, not a price! Please come in and see us and let us help you get the boat you’re after.”

That really does sum up these boats. By golly, they’re not cheap; that is, compared to any other aluminium trailer boat of similar size that I know of. But compared to what you get in materials, construction, finish, attention to detail and performance, they are definitely not expensive. Read Ocean Master to remind yourself of the old adage that you pay for what you get. Most certainly, in respect of our test boat, the layout and finish are nothing short of spectacular. It exudes comfort from bow to stern, yet it is an incredibly-well-designed offshore fishing boat. Just the amount of rod storage in the launchers and the dedicated working-rod holder positions would make it a joy to game fish out of. The massive struts supporting the targa top certainly beckon the addition of outrigger poles. And make no mistake about it: fitted without a targa top in a more open plan, you could manoeuvre and fish happily from the big Ocean Master on most barra waters in northern Australia. I’m basing that on my own experience with the Twister which is brilliant on barra water; after all, the Vortex has the same beam and depth – it’s just that it’s 900mm longer.

The Vortex 741 is rated to 400hp, so that would mean a transom design that would take twin 200s, which is available. However, our boat was fitted with the E-TEC 300. So it’s all grunt with heaps of top end speed. With four on board on board, at WOP (wide open throttle) it attained 6000rpm and 81kph. Amazingly, at that economical-benchmark rpm of 4000, it still hit 60kph.

I’d been in boats with big E-TECs before, so the smooth and quiet operation of the big two-stroke were no surprise to me.

From the moment you crank the throttle forward, the big boat just gets up and boogies.

Under way and at rest, it is incredibly stable thanks to the two wide sponsons with a sharp, narrow V squeezed between them. There are also independent reverse chines immediately inside the sponsons. In a short, steep sea, the V entry cuts the water fine (so no slap) and then the buoyant sponsons and reverse chines cushion the ride as they make contact.

Like it’s smaller cousin, the 651 Twister, the 741 is acknowledged as an impressively-dry boat on open water.

It’s pretty obvious that I’m being more than a tad subjective in this boat review. The fact is that I love Ocean Masters…and I’m certainly rapt in this big Ocean Master. Really, what’s not to be rapt about?

Interestingly, as NAFA Editor, I noted and endorse a comment once made by our Boating Editor, Warren Steptoe: “Trust me, if a boat or gear test says it’s all good, chances are that opinion is commercially based rather than an objective or even subjective opinion.” I’d like to think that there’s a fair bit of the objective to go with the obvious subjective opinion in this review. It’s no small claim that I doubt you’d find a better-designed-and-finished (for both comfort and fishability) mega-centre-console aluminium trailer boat. When you add to that its amazing comfort at high speed over rough water, what you’re looking at in the Ocean Master 741 Vortex is a big boy’s toy that exudes super-star qualities.