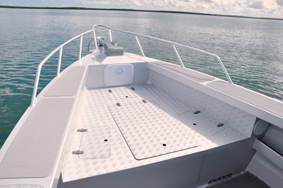 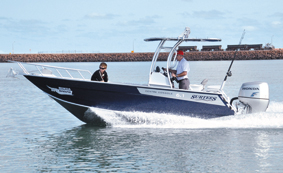 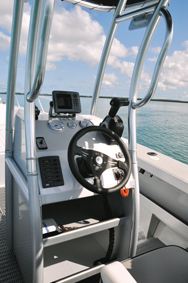 The NZ-made Surtees 6.1 Workmate, customised by Darwin’s BH Marine to suit north Australia’s bluewater and estuarine applications, is a versatile boat, underpinned by innovative design features. Fishing for estuary and inshore species has traditionally been the domain of smaller boats in Australia. A quick glance around your local boat ramp will soon tell you that this is changing. Whether for greater levels of comfort and safety, a desire to reach  out-of-the-way fishing spots or just the versatility of fishing both estuary and blue, many boat buyers are now going big.

A majority of great Top End barra guides these days are running boats of 6m and over.

New entrants to this bigger-boat market need to be up to scratch to compete. The Surtees range from New Zealand fits the bill.

Our test boat was provided by BH Marine, the NT dealer for Surtees, which has worked on a few changes to the fit-out — casting deck, console rather than cabin and more seating positions — that would make it even more appealing to Aussies.

Having said that, the original Kiwi design with a hardtop cabin has sold well, despite the tradition of open boats for sportfishing that prevails in northern Australia.

Surtees Boats was born during the early 1990s when Kiwi Neil Surtees decided to design and build himself an aluminium boat to use for fishing off the Whakatane coast.

When locals saw the finished product and the way it performed in tough conditions, they were so impressed that they asked Neil to build them boats…he was soon in full production mode.

BH Marine had in stock a Surtees 6.1 Workmate with a centre console set-up, so I arranged to meet BH Marine’s own Byron Hazel down at the ramp to take it for a run.

The Surtees Workmate looks the goods straight away. The level of finish and attention to detail are extremely high throughout, and this extends to all the bits under the deck that you can’t see.

The hull design is a simple aluminium deep V with a very fine entry point and  spray-deflecting chines, and with a 5mm bottom and 4mm sides. There are six welded stringers adding extra strength.

The best feature of this hull is the  self-flooding ballast tank running along the keel. At rest, the tank fills with water —  350 litres in the case of the Workmate — which makes it very stable as a fishing platform. When you take off, the water empties out instantly, so you get the benefit of added ballast at rest without the weight while running.

A gate — operated by the fool-proof system of a tug on a cleated cord — also allows the option of retaining the ballast while under way in heavier conditions. This makes quite a dramatic positive difference to the handling and the ride is softened without any pounding. It does cut back on your top speed and fuel economy with the ballast retained, but this is well worth it if it gets rough for the significant improvement in ride quality. The hull is backed with a six year warranty.

Inside, there is a fully welded self-draining deck covered with a rubber matting material that is easy on the feet. But you can choose carpet or go without any deck covering. The centre console is set back, which is typical Top End design, allowing for plenty of  walk-around space. The raised front casting deck conceals an esky and plenty of storage space under its many hatches.

On top of the console is an optional rocket launcher with a small shade cover. The Surtees range are readily customised — from a long list of available features; everything from outriggers to a kitchen sink if you want one!

The console launcher is a good feature. As well as providing shade and space for five rods while not interfering with fishing, it’s a handy spot to hang on to while travelling, and the curved lines look great. The test boat had additional storage in a rear rocket launcher, taking care of one of the great annoyances of life: not enough storage space for rigged rods.

The gunwales have more rod holders (three to a side) and what I at first thought was a multitude of drink holders for the extra-thirsty angler. Turns out they are for holding your sinker or lure on the outfit you are using — a top idea.

Under the gunwales are long pockets to store all those bits and pieces close to hand but out of the way.

At the transom is a nifty live-bait tank with a clear front so you can check on the health of your livies at a glance. There is a kill tank under the floor at the back which could alternatively be used for storage provided you put the bung in.

The anchor was raised by an electric winch on the test boat — another option. The quality of the raised winch mounting shows the attention to detail in a spot where the easy option would have been to just cut a hole in the deck and bung it in. The dual battery setup at the rear transom comes standard.

The best feature of this hull is the  self-flooding ballast tank running along the keel.

There is plenty of aluminium on show inside the Workmate which has been painted with a clear coat for protection. It’s a good  look, imparting a contemporary and functional feel.

The test boat was powered by a new BF115 Honda mounted on the rear pod. The BF115 was heaps despite the size and weight of the rig. At WOT, the Workmate and Honda combo scooted along at a respectable 70km/h and 6000rpm, and cruised at 42km/h at 4000rpm. The hull is rated up to 150hp but the BF115 is a great match and has no problem propelling the Workmate.

Hondas are a reliable and proven power plant and there are plenty of those silver cowlings to be seen at northern Australian boat ramps. We had to move a little to balance the boat while running lightly-weighted due to the deep V. This would be helped with a full fuel tank (170 litres) and a loaded esky, but trim tabs would be a good addition to consider…and don’t forget that innovative ballast cylinder.

The Surtees hull cuts the water smoothly, offering an excellent ride for a big plate boat and a positive and solid steering response.

The Surtees 6.1 Workmate is a versatile and well-put-together boat, and would be perfect for long runs down the coast to remote fishing spots, or heading down to the mouth of a big river in style. It’s still small enough to fish rivers and billabongs but would be equally at home heading along the coast to a secret creek. Anglers will love the long-range, smooth ride and full walk-around design of the centre console.

BH Marine is selling the boat as a  ready-to-go package on a tandem-axle Oceanic trailer, but you can specify the electronics.

As there are so many customisable features, it is hard to give an exact price on the Surtees 6.1 Workmate, but you would be looking in the region of 60K, depending on options. The test boat would be at the upper end of the scale, particularly with the addition of the console rocket launcher and Lowrance HDS electronics.