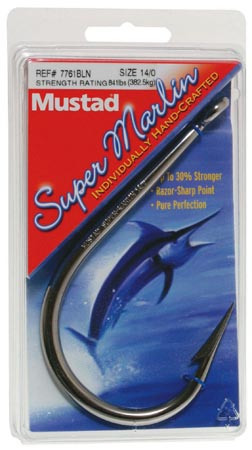 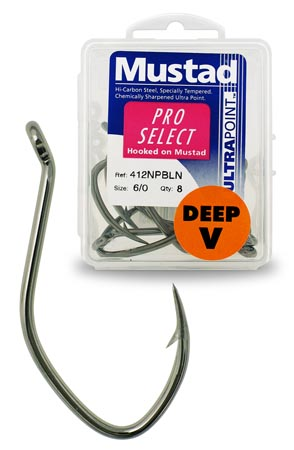 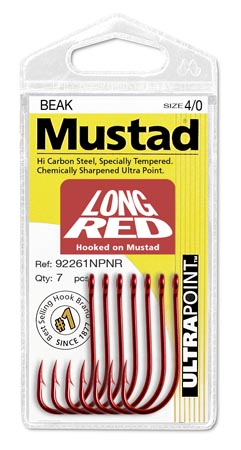 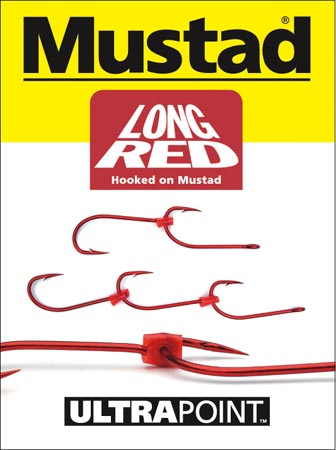 Mustad’s Pro Select group of hooks have developed into a potent range within a range. It started in the late 1990s with the Mustad Aberdeen, a hook that became synonymous with soft plastics and leadhead jigs. Later, Mustad added its front line offset worm hook, the Mega Bite. Now two more hook patterns have been added to the Pro Select range.

The first is the Mustad Power Bite. That’s a hook I’ve been waiting for, ever since I got serious about barra with soft plastics. The Power Bite (ref 38104BLN) is a bigger, stronger offset worm hook for soft plastics, sized up to 8/0. Basically, it’s a scaled up version of the Mustad Mega-Bite which is itself an excellent all-round offset worm hook that catches just about anything, and which I have used on barra with great success. But the Mega-Bite only went up to 5/0. The Power Bite goes to 8/0 maximum size and it’s a good, wide-mouthed 8/0 at that.

So the Mustad Power Bite allows extra flexibility in soft plastics fishing — extra big baits and extra big fish. Apart from barra, it will be just the ticket for saltwater targets like yellowtail kings and mulloway down south.

The Mustad Power Bite is forged for extra strength, has an angled-in point for good snag avoidance, a smooth black nickel finish and Mustad’s Ultra Point feature for enhanced durability in a chemically sharpened point. Available sizes are 8/0, 6/0, 4/0 and 2/0.

The Mustad Deep V is an intriguing hook which began life as, of all things, a catfish hook in the northern hemisphere. Now those are credentials that most Australian anglers wouldn’t find endearing! But Mustad thought the hook had potential in deep reef fishing on species like mulloway, pearl perch, snapper and tropical reef dwellers. Field testing proved that to be true, and the hook found its way into the Pro Select range under the name Deep V as a sort of up-market saltwater bait fishing hook.

The Deep V is a hook that uses modern steel technology to give a high degree of strength, without using wire that’s as thick as a drainpipe. But the shape of the hook bend is also important. The deep, narrow, V-shaped bend also enhances strength, something utilised in commercial tuna hooks.

Anyway, to cut a long story short, the Deep V is a big hook that is light enough to take quite delicate baits but still strong enough to handle hard-pulling fish (I’m told that this is critical for northern hemisphere catfish, some of which can reach very large size). As bottom bouncing becomes more refined, the Deep V is likely to take over from some of the older, heavier Kirby-style hook patterns. Sized from 10/0 down to 2/0, it features a black nickel finish and a chemically sharpened point (with Mustad’s Ultra Point treatment of course).

It also has a turned back eye in the beak/suicide style, so anglers looking for a chemically sharpened XOS snapper hook should have a look at the Deep V in the bigger sizes.

If there is such a thing as the Rolls-Royce of fish hooks, then the Mustad Super Marlin is it. Apart from being surely the most expensive hook on the market, the Super Marlin is substantially hand made and numbers imported into Australia can just about be counted on one hand. A specialist heavy game fishing hook, the Super Marlin was first made many years ago, then disappeared, but is now being revived as a flagship product for Mustad.

The original Super Marlin was entirely hand made, being manually hammered out from a piece of steel rod (in contrast to most hooks which are machine-bent from wire). The eye was made by flattening the end of the rod then drilling through the flat and smoothing it. The hook had a specially tapered shank and was built for great strength. As you would expect, it wasn’t cheap and became known as the Cadillac hook — according to folklore, a trade box of Super Marlins cost about the same as a Cadillac.

Escalating costs pushed the Super Marlin off the market some 25 years ago but now it’s back, thanks to new production efficiencies making it feasible again. There are some variations from the original, such as a new black nickel finish, and the eye is now made more conventionally and precisely brazed shut. But the same strong, formidable construction with the tapered shank is still there. Some procedures have been streamlined, but the manual component is still very high and the precision with which each hook is made is obvious.

The Mustad Long Red is another heavy-ish bait hook, a bit like a stretch version of the Big Red with a straight eye if you can imagine that. That’s nothing terribly radical, except that it has an exceptionally large ring and that allows two things;

• A heavy trace or doubled-up dropper can be fitted more easily through it.

• It can be used in the making of vinyl gangs — ganged or linked hooks which use vinyl tubing and sidestep the open eye system.

It is the same system that has been used to create trailer hooks (stingers) on spinnerbaits and jigs. Place a sleeve of vinyl tube over the large eye then push the barb of the next hook through it. And that’s it – a strong and secure attachment. Apply it to the ganged hook system and you can make a 3 or 4 hook gang just as easily.

The Long Red (ref 92261NPBLN) is the right shank length, shape and size to create a classic tailor gang to hold a whole pilchard. With a fairly heavily offset (reversed) point it resembles the traditional Kirby-style ganged hook – except that it’s about a thousand per cent sharper and stronger!

Vinyl gangs maintain the full strength of the eye, as there is no wire bending involved. The vinyl sleeve stiffens the gang and opinions might vary whether that is a good thing, but it does seem to keep the pilchard on track better and keep it intact longer. And the hookup rate seems fine.

Other than that, I’ll leave it to the expert pilchard tossers in other regions to pass judgment. But I do believe that big eye hooks and the vinyl tube have a lot more potential here. One of the reasons why good chemically sharpened gang hooks have been hard to find is that the hard steel needed to support the chemically sharpened point makes eye closure difficult. The result tends to be hard hooks with brittle eyes, or soft hooks with weak points. The big eye vinyl system doesn’t need any eye bending, so you can link the chemically sharpened hooks and get the benefit of their strength and sharpness.

Ganged or linked Long Reds could come into their own in tropical reef fishing, where many anglers use whole pilchards on ganged hooks to target reef species. The Long Red is a strong, gutsy hook in its own right and a gang of Long Reds will be many times stronger than a gang made from conventional open eye hooks.

KEEPING UP WITH MUSTAD

Australian anglers now have a ready made reference to the vast and constantly changing Australian range of Mustad hooks, terminal tackle and accessories. To help keep up with things, Mustad has launched a special Australia/New Zealand section of its web site so that Aussie anglers can tell instantly what is available here.

That’s a big help because the Mustad hook range varies tremendously around the world. The same hook can go under different names and different packaging in different countries. Having a dedicated Australian range avoids a lot of confusion. (New Zealand products are also included but any product exclusive to one of those countries is clearly indicated).

Because of the rapid product changes, printed Mustad catalogues had never been made available to Australian consumers. But the digital age means that an up to date listing can now be kept and it should end a lot of uncertainty about what Mustad hook patterns and sizes are still available.

You’ll see all the hooks in all the ranges, from the Classics and Big Game hooks up to the latest Ultra Point, MT Point band Signature patterns. You can get an actual size printout of the size charts for each hook – just click on the relevant hook outline. New sections also deal with Mustad terminal rigs, fishing line, tools and other accessories. There is also a news page with new products highlighted.

So if you want an authoritative up-to-date listing of what’s available from Mustad, just click on to www.mustad.no/australia_nz.