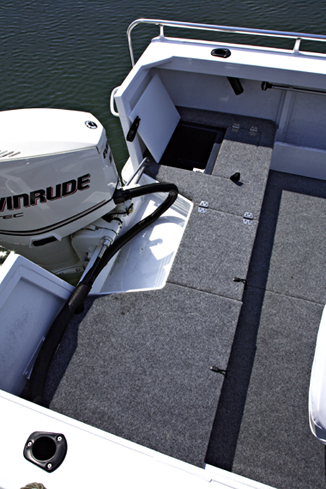 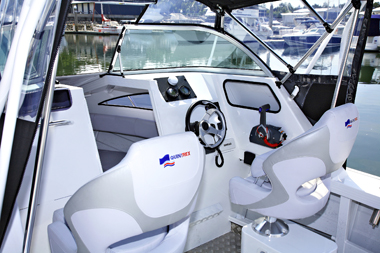 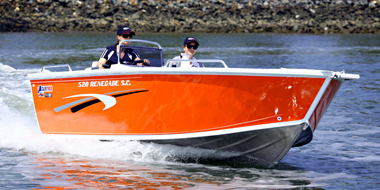 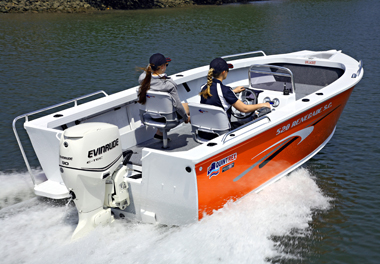 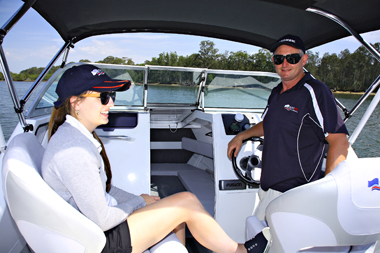 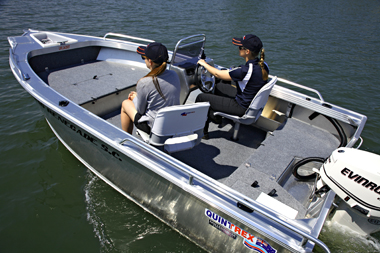 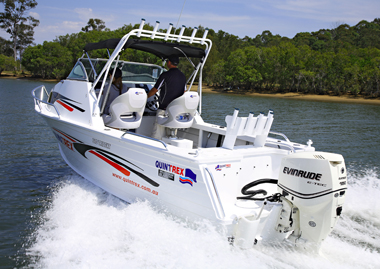 BACK TO THE FUTURE BY WARREN STEPTOE

After introducing what surely must be more innovations than most other aluminium boat builders put together, Quintrex are at last returning to their roots and building serious fishing boats again.

Strangely perhaps, one of the best things about the new models introduced in 2012 is that Quintrex’s characteristic flared bow is conspicuous by its absence. I know flared bows have come and gone every now and then from some models in the Quintrex range, but that hasn’t changed the fact that, by and large, a stretch-formed flared bow has been Quintrex’s most-recognisable feature for a very long time. For actual generations before they began stretch forming the bottom sheets too to create their Millennium hulls which, 12 years later, remain probably the best-riding production aluminium boats in the world today.

Why then do I say that lack of a flared bow is one of the best things about the new Renegade models released this year? Two reasons. One is that the new, fuller bow shape affords considerably more deck space – bow-casting deck space that is – in all the new Quintrex Renegade boats. After a very successful introduction of the Renegade concept last year, the range is now expanded to 4.2, 4.4, 4.6, 4.9 and 5.2m models, in tiller steer and inside or centre console. In each of these boats, the expanded bow-casting deck space is mirrored below decks in expanded under-deck stowage space.

All the new Renegade hulls also became even more spacious inside when Quintrex increased their beam substantially. Even the little 420 hull has a 2.06m beam, while the 440 has 2.11m, the 460 2.22m, and the 490 and 520 have 2.25m. This of course also makes the hulls very stable, even with a heavy person up on the casting decks.

The second good thing about the new non-flared-bow Quintrex boats is that the hulls are still stretch-formed between the chines and the keel so, while the flared bows are gone, the industry leading Millennium hull with the best ride in tinnies isn’t! Renegades still ride way better than your average tinny, without the loss of internal space inherent in Quintrex’s traditional flared bow hulls.

Trying the Trident Quintrex’s other major introduction for 2012 is a new series of offshore fishing boats called Tridents. Tridents DO have flared bows, but as you’ll see for yourself with a close look at NAFA’s images of the new 6.1m Trident nearby, the flare is nowhere near as pronounced as it has been in the past. Again, this manifests itself inside the boat with extra interior space, while the bottom sheets between the chines and keel are still stretch-formed into a variable deadrise; in this case, the Millennium Blade variant featuring increased deadrise angles to further improve ride characteristics offshore.

Let’s stay with Tridents for now before returning to the Renegade range.

Tridents come in 6.1 (the model pictured here) 6.5 and 6.9m models, all in a cabin configuration. The hulls are built with 5mm sheet bottoms and 3mm topsides with a criss-cross egg-crate-type reinforced rib structure below decks. All Trident hulls are built from a special aluminium sheet material developed especially for stretch forming called H34 Temper 5251.

Quintrex claims that pressing the aluminium sheets forming Trident hulls stiffens them and increases their tensile strength by 25%; and that of the bottom sheets by 50%. It changes the material’s molecular structure as it effectively work hardens.

Inside, the new Tridents follow the well-established formula for 6m-plus offshore fishing boats closely; with a few innovations hard to find in ‘glass competitors thrown in for good measure.

Trident transoms feature a transom door and small boarding deck with a central workbench, portside live bait tank, and a burley bucket all standard equipment. The transom bulkhead has two separate stowage areas for batteries and (for boats powered by two-stroke motors like the one seen here) an oil reservoir. The 610 Trident I was aboard also had an optional fold-away lounge seat.

Trident decks are checker-plate aluminium carried high enough to self-drain. Special moulded scuppers both drain the deck and prevent water intrusion as weight shifts about inside the boat or surface chop slaps against them. There’s a 135L fish box set into the deck too.

In the helm area, high-back bucket seats have a flip-over bolster to make driving the boat as comfortable and well supported seated as it is standing. Both seats sit atop stowage lockers and I was pleased to note a small step to help those whose backsides are fairly close to the ground (like myself) to reach rods stowed in the (standard) overhead rocket launcher.

Inside the cabin, the bunk in the 610 model I was aboard had plenty of room for sleeping, especially when the optional bunk infill is installed. A portable toilet under the bunks should be on the options list by the time this issue of NAFA hits the stands.

That’s all pretty much how 6m half-cab fishing/family boats go, except this one comes in aluminium for people who prefer aluminium. The excellent arrangement of walkthrough windscreen and cabin top allows bow access that few ‘glass competitors can match.

Hydraulic steering comes standard, and that to my mind is a sensible thing when you’re talking motors over 115hp. The boat seen here was powered by a gutsy E-TEC 150 which ran out to a top speed over 35 knots with PLENTY of mid and low-range grunt to get it there. E-TEC motors can be fitted as part of Quintrex’s Instant Boating packages which include a full fit up and a matched Quintrex trailer (Instant Boating packages are available for all Quintrex models – it’s worth checking the website to see what you get for your money). Trident packages start under $52,000 for the 610 model. Our test boat with quite a few options was up around $55,000.

Back to the Renegades. When introduced last year, Renegades were an instant success, offering as they do well-thought-out deals with popular options integrated into excellent value-for-money packages. The unpainted 440 model had a price tag just over $23,000, while the you can’t miss it orange 520 model was around $31,500.

They’re the prices for the boats you see with bowsprits, side rails, side decks etc, carpeted casting decks, side consoles, electric motor mounts, huge under-deck stowage compartments bow and stern, 2 pedestal seats, roto-moulded anchor lockers in their foredecks, live-bait tanks under the stern casting deck, plus a 50hp E-TEC for the 440 and a 90 for the 520.

Those E-TECs never lack grunt throughout the rev range; it’s one good reason to choose a direct-injected 2-stroke, with the 520’s top speed over 30 knots and the 440 missing 28 by a decimal point or two.

The Renegade options list is a short one with only flash paint jobs if you want them, even flashier vinyl wraps if you like to look really good, a shade top and folding seats. The only option that’ll divide opinion is the transom. Some will prefer the raised aft casting deck with live-bait tank and the motor mounted in a cutaway with a small splash well beneath it. This affords more raised casting deck space aft while the full-height transom option with the outboard mounted in a full-size engine-well makes the aft end of the boat more of a cockpit with added safety in following seas and the support for upper legs people need when fishing rougher water.

They’re both pretty good choices: you can convert a Renegade from an inshore barra/bass/bream style lure casting platform to a boat capable of fishing more open water where pelagics roam.