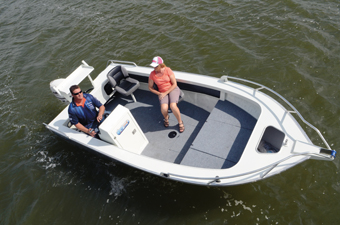 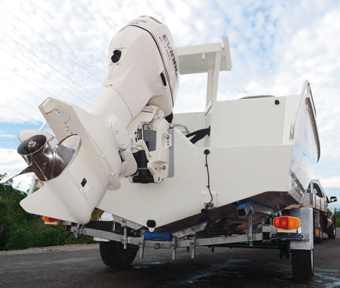 Territory Marine’s new River to Reef 500 Tommycutt wins out in stability, ride, comfort, dryness and strength. Plus it’s a versatile boat that will be magic on barra water and well able to cope out on the blue. If you were to nominate a boat configuration that is the most popular amongst the army of boat owners who fish both our tropical estuaries and inshore coastal waters, it must surely be a 5m aluminium V-bottom with a side-console.

That 5m of bow-to-transom length is not at all too large to tow across dirt roads and launch in tidal rivers and billabongs. Similarly, it is not too small to venture offshore for some coastal bluewater fishing.

The side-console just seems to have evolved into 5m V-bottom boats for the tropics; at least it has so more than any other helm position.

Territory Marine’s all-new River to Reef Tommycutt conforms almost exactly to that format. It is 5.1m in length and it has a side-console steering station, leaving considerable open deck space.

There are four models in the River to Reef range, and each is named after a famous Top End waterway: the 400 Magela (named after the iconic Magela Creek way downriver on the East Alligator); the 450 Wildman (named after the fish-rich Wildman River which marks the western border of Kakadu National Park); the 500 Tommycutt (named after the home of monster run-off barra, Tommycutt Creek, which is one of the two tributaries of the Mary River); and the 550 Nourlangie (named after that famous upstream tributary on the South Alligator River, Nourlangie Creek).

These are plate-aluminium boats and they have been competitively priced to meet a growing demand — particularly in the Top End — for tough, versatile, small-to-medium trailer boats that work both for barra and bluewater, to varying extents either way (depending, of course, on size).

I was interested to learn that the River to Reef range was designed by legendary New Zealand boat designer, Scott Robson. In case you didn’t know, Scott Robson designed those practically-indestructible, unsinkable, and super-soft-riding Ocean Master boats. As with the superbly-finished Ocean Masters, which price-wise come in (justifiably so) at the very top end of the aluminium-trailer-boat market, the River to Reef range exudes a high-quality finish but in a simpler, more-traditional format.

Every River to Reef boat is built bare-bones hull in Ocean Master’s Wakerley Queensland factory, then sent to Darwin to be fitted out by Territory Marine which has full steel and aluminium fabrication facilities, a modern marine and auto upholstery unit, and a 14.2m spray booth. Territory Marine builds  super-tough boat trailers too.

Standard fit-out for the Tommycutt  side-console includes three cushioned seats and pedestals, hydraulic steering, navigation and stern lights, battery and battery box, bilge pump and switch panel. Built into the hull standard are the forward anchor-well, raised casting platform with a huge underfloor compartment on a gas strut, mid-section underfloor storage compartment, extra-long side pockets, full-width transom deck with open compartments and underneath storage, bow and stern side railings, and external engine mount with standing area either side.

There is an endless array of options on offer. I’d certainly go for a couple of extra seat placements just where the forward platform rises from the main deck. There is also room underfloor in the stern half for a large, plumbed, drainable fish box or an extra fuel tank. I’d go for one of those too. The Tommycutt 500 can also be ordered in a tiller or rear-console version.

The Hull This is a solid boat, with ample ribbing and bracing along the inside of the hull, together with 3mm sides and a 4mm bottom.

I’m not sure what the deadrise is at the stern, but there’s plenty of V. As in all four models, the V-hull design incorporates a wide, almost-flat, reverse chine, which stays wide from the stern for at least two-thirds the length of the hull. After that, it progressively narrows all the way to the sharp entry at the bow. This is a very clever design feature which became patently evident during our on-water trial. To cap it off, there are two additional planing strakes welded either side of the pronounced, tubed keel.

On The Water There were three of us aboard for the test run which took place on a breezy afternoon on Darwin’s East Arm. Although these were enclosed waters, hovering storms and  tide-against-wind conditions meant we had a bit of slop to play with — certainly enough to evaluate ride comfort and how dry (or wet) the Tommycutt 5m is.

Although rated to 115hp, the 90hp Evinrude E-TEC zapped the plate hull straight up on the plane, which was impressive given there were three adults onboard plus a tank of fuel. No point mucking around…I gave it full throttle first up and hit 65kph (on the GPS) at 5100rpm. I suppose that was to be expected with the light-weight, high-performance E-TEC, but what was most impressive were the 36kph achieved at just 3000rpm, 43kph at 3500rpm and a hang-onto-your-hat 52kph at just 4000rpm. I’d envisage incredible fuel efficiency, with ample speed, at  3500-4000rpm, with engine noise levels pleasantly low. And can you imagine the performance of the River to Reef Tommycutt with a 115 E-TEC on the back. I also brought the engine down to its lowest revs, 500, just to feel it at normal  barra-trolling speed. The boat crawled and the E-TEC purred quietly…about all you could ask for really.

Okay, how did it handle the slop? Well, although I had more than an inkling from the deepish V-hull flanked by those  incredibly-wide, almost-flat, reverse chines, it still blew me away actually. The Tommycutt 500 simply annihilated the sloppy conditions…end of story! The ride was amazingly soft, and you couldn’t ask for a drier, V-hulled 5m tinny…well, I suppose you could, but you’d be flat out finding one!

It All Made Sense In the end, it all made sense to me. The River to Reef hull is a modified version of the Ocean Master hull design. In that hull design, you have two wide sponsons with a sharp, narrow V squeezed between them. In a short, steep sea, the V entry cuts the water fine (so no slap) and then the buoyant sponsons cushion the ride as they make contact. That principle is not so pronounced in the River to Sea hull, but those big chines either side work, to a degree, the same as the Ocean Master sponsons. Combined with the deflecting planing strakes, they also account for how well spray is kept out of the boat.

At rest, stability was excellent…again thanks to those wide, flat chines.

The Verdict Make no mistake about it: this is an outstanding and versatile 5m boat for fishing the tropics. It can be tricked up as much as you want because all River to Reef hulls arrive in Darwin bare-bones. There are plenty of boats this size that are ultra-comfortable inside, with plenty of room to fish when casting or trolling inland waterways for barra. However, I suspect you’d have to look around the same stable that the Tommycutt emanated from to find a 5m V-hull with such a comfortable and dry ride. Contact Ben McDonald at Territory Marine: 08 89329444; ben@territorymarine.com.au ; www.territorymarine.com.au