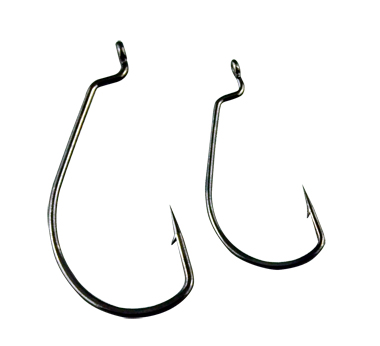 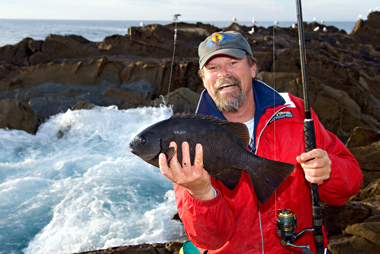 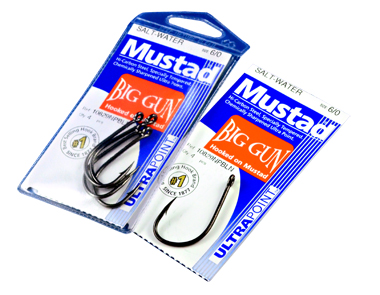 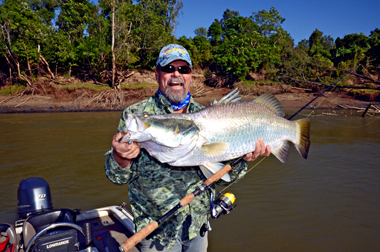 ONE MAN’S HOOKS by Steve Starling

Barra on Mustad PowerBites and Drummer on Mustad Big Guns…NAFA interviews Steve “Starlo” Starling on two of his favourite hooks.

Steve “Starlo” Starling is without question one of the country’s most prolific and recognisable fishing writers, educators and on-screen presenters. His high standing within the angling media world was recently acknowledged by the peak angling representative body, Recfish Australia, which presented Steve with its national award for Excellence in Recreational Fishing Communications, officially recognising his near-40 year involvement  in the industry. For the past three years, Steve resided in Darwin, but has recently relocated back to his favourite part of the world: Tuross Head on the NSW far south coast.

During his stint living, fishing and working in the Top End, Starlo was instrumental in popularising the use of snag-proofed or “weedless” soft-plastic rigs to target barramundi, saratoga and various other tropical sport fish living in dense snag piles and under the cover of aquatic weed and lily beds.

“I was first introduced to the incredible effectiveness of weedless-rigged or snag-proofed soft plastics by the publisher of this magazine, Alex Julius,” Steve explained. “That was back in about 2006, during a visit to Alex’s Arnhemland Barramundi Nature Lodge, near Maningrida.

“Alex had already been using this technique with great results for a while,” Steve continued. “He was rigging paddle-tailed, shad-style softies like the original Squidgy Fish on 6/0 and 8/0 Mustad PowerBite worm hooks, running a ball sinker on the heavy nylon leader ahead of the lure, and casting this set-up deep into snag-studded cover to catch tidal-water barra and other tropical species. To say that this approach was effective would be something of an understatement! Alex was pulling heaps of good fish from places that would previously have been regarded as totally un-fishable by most anglers… I was impressed!

“Over the following years, I took Alex’s techniques, refined them a little and helped spread the word via the national angling media. When The Mongrels team won a very tough Barra Classic in 2010, largely as a result of using exactly this rig, its place in Australian angling history was finally cemented. Looking back, I’d estimate that at least 80 per cent of the barra I’ve caught over the past five years — in both tidal and non-tidal waters — have fallen to various manifestations of this deadly rig.

“Looking back, I’d estimate that at least 80 per cent of the barra I’ve caught over the past five years — in both tidal and non-tidal waters — have fallen to various manifestations of this deadly rig. I’ve also lost count of the saratoga, golden snapper (fingermark), threadfin salmon, javelin fish, cod, trevally and other northern species I’ve caught on so-called Texan-rigged weedless or snag-proofed plastics,” Starlo enthused. “It’s my go-to rig these days in soâ€¨many situations.

“Equally as exciting is the fact that we’re now transferring the use of these rigs and the techniques for working them from north to south: down-sizing the plastics, hooks, leaders and sinkers to effectively target bream, bass and Murray cod in the snags, flathead in dense ribbon weed beds, and jewies (mulloway) over rough reef strata or along breakwalls. It’s really neat to see such a north-to-south spread of fishing know-how. In the past, angling evolution in this country has so often flowed in the opposite direction.”

These days, Starlo’s favourite terminal set-up for barra involves a Mustad PowerBite (38104NP-BN) wide-gaped worm hook attached to a 25 or 30kg mono leader via a loop knot, with a suitable ball sinker simply strung into the bottom part of the loop. He’ll then rig a Squidgy Slick Rig, Mongrel or curly-tailed Ridgeback body on the hook, or use one of his tweaked-up Squidgybins: a modified Squidgy Lobby tail with legs and eyes (search Squidgybin on the internet for more details).

“The Mustad PowerBite is a great hook for this caper,” Steve explained. “It offers just the right combination of shape, penetration and strength. However, recently I’ve had a chance to play with some pre-release samples of the new KVD Grip-pin version of the same hook that Mustad will launch here in the next few months… All I can say is that this KVD Grip-pin design takes a great thing and makes it even better!”

“One of the things I most often longed for while living in the Top End was my southern rock fishing,” Starlo told us. “In particular, I missed wrestling with those big, bad, bruising pigs!” he continued, using the common nick-name for the eastern rock blackfish or black drummer: a very popular rock fishing target along the nation’s south-east coastline, between Fraser Island and Wilsons Promontory.

“I grew up chasing drummer, bream and silver trevally from those wave-washed southern rock ledges, mostly using cunjevoi, abalone gut, crab and peeled prawn tail baits strung on Mustad’s classic old 540 and 542 ‘French pattern’  hooks,” Steve reminisced. “In those days, I guess I never questioned whether that particular mouse trap could be improved upon, because we caught a mountain of fish on those old, brown hooks… But when the first chemically-sharpened Mustads came along in the 1990s, it quickly became apparent that you really could improve on an already great product!

“Then the Mustad Big Guns arrived!” Steve enthused, his eyes widening noticeably with excitement. “Boy oh boy, that was like re-inventing the whole game! Suddenly we had a wickedly-sharp and immensely-strong little hook that could be concealed beautifully inside a soft or hard bait, would hook the most timid of pickers, and had the structural integrity to hold onto a mega pig or even aâ€¨rampaging blue groper in the most white-knuckled, knock- down, drag-out encounters imaginable. What an amazing hook!”

In many ways, Mustad’s Big Gun is the latest iteration of the old Kirby-style fish hook: a genuine “all rounder” that can effectively catch anything that swims, in any place and at any time.

In many ways, Mustad’s Big Gun (10829NPBLN) is the latest iteration of the old Kirby-style fish hook: a genuine “all rounder” that can effectively catch anything that swims, in any place and at any time, but now with the significant added benefits of the chemical-sharpening process and modern metallurgy methods that create unbelievable strength in a relatively fine gauge of wire.

“Now that I’m living back on the far south coast of NSW,” Starlo told us, “I’m once again enjoying the simple, visceral pleasures of standing on a spray-soaked rock ledge at dawn, flicking lightly-weighted baits into a berley trail of soaked bread in search of Mr Pig and friends… I absolutely love it! And these days, I wouldn’t even think about hitting the rocks without packing a good assortment of Mustad Big Gun hooks in a spread of sizes from No 2 to about 3/0. They are without a doubt the best hook ever devised for this job.”